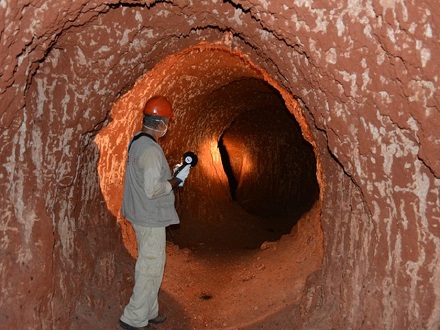 
IN THIS VIDEO The Geologist Amilcar Adamy shows the interior of the place he calls "The mysterious cave.

The man who accompanies him in the video - identified only as Aristeu - is the owner of the land where the giant burrows were discovered.

The tunnels were known for some time but only this year (2015) the nature of the structure has been studied enough to confirm its origin and nature: these tunnels and caves were made by the claws of huge sloths - the Megatheriums - in Pleistocene, period when the planet was inhabited by a megafauna - giant animals.

The Megatherium, extinct about 10,000 years ago, could reach up to 6 meters high weighing about 1.5 tons.

The alternative to explain the regular configuration of the caves - is also arcana. If were not Megatheriums, the galleries may have been dug by giant armadillos.
(Transcription of the audio-video bellow)

TRANSCRIPTION OF THE INTERVIEW OF THE GEOLOGIST
Amilcar Adami, in the video:


'We are inside the mysterious cave, in the property of our friend, Aristeu. This cave already is known for some time. Since 2008, at least we know about its existence.

In 2010, we've been here and caught our attention the circular shape of the tunnels, indicating that they don't result from a natural process.

This research went being developed for four years. Now, in July - 2015, we came here again - already with an established idea about the origin of these formations.

So, this cave, now we know it's a paleo-burrow, developed, elaborated by extinct animals that could be giant armadillos or giant sloths.

By the shape and the dimensions of the place we believe it was excavated by giant slóths that could reach a ton and a half and up to six miders high.

These sloths become extinct there about ten thousand years. Is not known the cause of this extinction. Maybe climate change, changes in vegetation, but it is not a sure.

The discovery is important for the study of peleo-climate and peleo-fauna that inhabited this whole region.

In Madeira riverbed we met fossils of pre-ristoric animals, including sloths. We were searching to know where they lived and now we know that here, in this cave - they found their natural shelter.